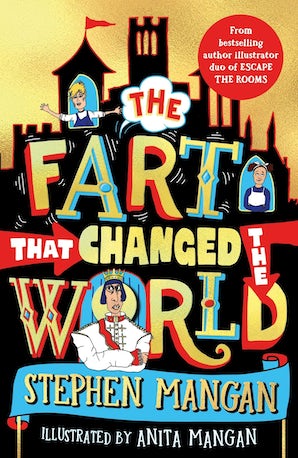 The Fart that Changed the World

It's the most important day of the year for King Fabian as he is hosting all the neighbouring rulers. Everything simply must go perfectly. King Fabian wakes up, stretches, and farts. His wife's fury is so huge that he panics and blames the butler, who is carted off to the dungeons. Leaving behind a big problem: Fabian isn't really the brains behind the crown: it is the butler... how will dithery Fabian manage to pull off this high-pressure event alone? His small and smelly fart looks like it will kick off a crisis...

Frank - a kitchen boy with a big imagination - is drafted in as an emergency butler. As the banquet descends into a food fight and processions catapult out of control, Frank finds himself in an all-out farty farce. Can he save the day?

Praise for Escape the Rooms:

'A beautiful and exciting adventure that ignites the imagination' Edith Bowman

I would like to order copies of The Fart that Changed the World. Please pass this request to the sales rep covering my region.