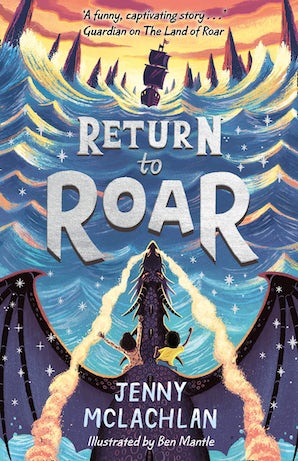 The magical sequel to the bestselling middle-grade fantasy adventure, The Land of Roar. A series that celebrates the power of imagination and finding the greatest adventures in the most ordinary of places - perfect for children aged 8 and up, and fans of Narnia, Jumanji and How to Train Your Dragon.

Twins Arthur and Rose can’t wait to go back to Roar, the fantasy world they get to through their grandad’s attic. Roar is a land of dragons, mermaids, unicorns, ninja wizards and where anything they can imagine can be real.

But when they return there’s no time for exploring, because a message arrives from their scarecrow enemy, Crowky.

WHAT’S IN THE BOX?

The Box would always contain the things that scared the twins most - and if Crowky gets hold of it, Roar could be in more danger than ever.

Soon they find themselves on another thrilling adventure, accompanied by old friends and new faces and seeing parts of Roar they'd almost forgotten. But will they get to the box before Crowky does? And if it opens, what will they see?

I would like to order copies of Return to Roar. Please pass this request to the sales rep covering my region.


Þ The time has come to reveal the very first of

Itãs Autumn and we are celebrating the new seaso