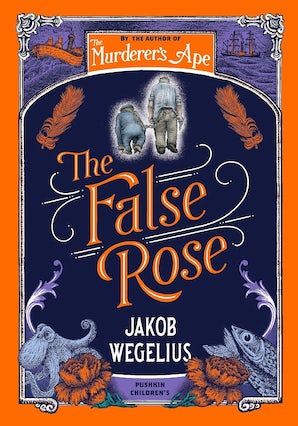 Sally Jones returns in the thrilling sequel to The Murderer's Ape! With gorgeously detailed black-and-white illustrations throughout.

When Sally Jones and The Chief discover a curious rose-shaped necklace hidden onboard their beloved Hudson Queen, it's the start of another perilous adventure for the seafaring gorilla and her faithful friend. Determined to get to the bottom of the mystery, they set sail for Glasgow, but there fall into the clutches of one of the city's most ruthless gangs, commanded by a fearsome smuggler queen who will stop at nothing to snatch the necklace for herself.

Held prisoner hundreds of miles from friendship and safety, Sally Jones must use all her strength, determination and compassion to escape and unravel the mysterious story of the False Rose - a twisting tale leading all the way from Lisbon to Shetland and the South Seas.

Praise for The Murderer's Ape

'I don't know when I last read a book with such pure and unalloyed pleasure. It's ingenious, it's moving, it's charming, it's beautiful, it's exciting, and most importantly the characters are people I feel I know like old friends. I thank Jakob Wegelius wholeheartedly for giving me several hours of joy' - Philip Pullman

'Does not disappoint... this extraordinary book acquires a passport full of stamps as it masterfully juggles skulduggery and malaria, accordion-making and aeronautics, fado and pastries, police corruption and at least two love stories... a rare treat; a book you want to thrust into the hands of children and adults alike' - Observer, Children's Books of the Year

'Evocative... original and old-fashioned in its storytelling... A story to lose yourself in' - Nicolette Jones, Sunday Times Children's Books of the Year

'There is so much to say about this unique and absorbing tale, but it would probably be better if you just read it yourself' - Sophy Henn, BookTrust, Children's Books of the Year 2018

This error message is only visible to WordPress admins
Error: No posts found.

This website is currently under construction, the brand new Bounce website will be live in November. Stay tuned for more info!