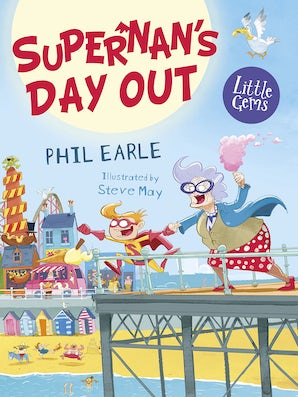 Phil Earle, illus by Steve May

An unexpected family secret has hilarious consequences in this action-packed story from Phil Earle and illustrator Steve May ― perfect for superhero fans.

Plane crashes, robberies and fires were not what Stanley was expecting on a day out at the seaside with his nan and the other residents of her care home! Nan doesn’t know about his superpowers, so Super Stan can’t step in to help as it would blow his cover.

Luckily, though, another mysterious superhero seems to be on hand, saving the day. But who could it possibly be?

I would like to order copies of SuperNan’s Day Out. Please pass this request to the sales rep covering my region.