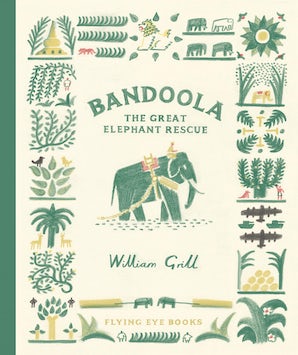 When a world war comes to Myanmar (Burma), one special elephant becomes a hero. As people are forced to leave their home in the Burmese jungle, Bandoola, his keeper and war veteran James Howard Williams (Aka Elephant Bill), undertake a journey that will test their courage, taking trust, understanding and bravery to the very limit. Together, they lead a group of 53 elephants and over 200 refugees to safety, scaling 6000ft mountains as they trek from Myanmar to northern India.

In this moving tale based on a true story, award-winning William Grill's stunning illustrations show the majesty of Myanmar's forests and mountains, the backdrop to a heart-warming tale about empathy between humans and animals, and the strength that can arise from working together when the world is full of danger.

I would like to request an author event for Bandoola: The Great Elephant Rescue by William Grill

I would like to order copies of Bandoola: The Great Elephant Rescue. Please pass this request to the sales rep covering my region.