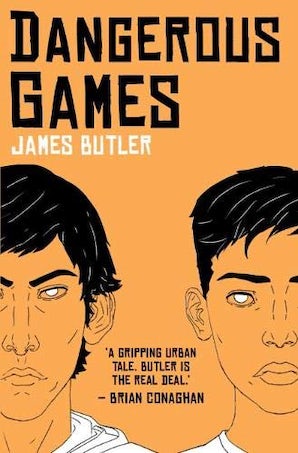 Kevin’s older brother, Adam, is a bad lot. Adam and his mates burn out a car they’ve stolen, trash the local community centre, and to cap it all, Kevin discovers a gun under the floorboards in his room. And then there’s Uncle Davey, even more of a bad lot than Adam, who’s just out of prison and already back to his old habits.

Kevin makes friends with Conor, who lives in a swanky house with his mother, a bank manager. When Kevin discovers that Adam and Uncle Davey are planning a tiger kidnapping, and that the victims are going to be Conor and his mother, he comes up with an ingenious plan to foil the plot, rescue his friend and dispatch no-good Uncle Davey for good.

A tightly plotted and absorbing realistic novel with a serious-minded and likeable teenage protagonist, who gets himself caught in a web of crime and deception — and, both cleverly and bravely, solves one problem after another to come out triumphant at the end.

I would like to order copies of Dangerous Games. Please pass this request to the sales rep covering my region.


üéÑThe time has come to reveal the very first of