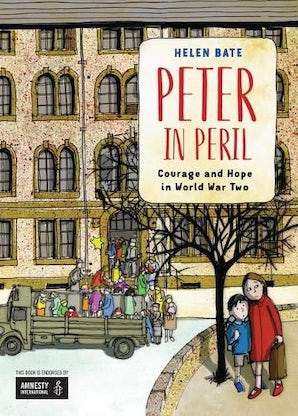 A moving graphic novel telling the true story of a young boy caught up in the terror of World War II.

Peter is just an ordinary boy, who loves playing football with his friends and eating cake - until war comes to his city and the whole family have to go into hiding...

This moving, true story of the Second World War, set in Budapest, Hungary, shows in vivid words and pictures how Peter, his cousin Eva and his mum and dad bravely struggle to survive in a city torn apart by warfare.

'This book, which establishes "the right to life and to live in freedom and safety" could not be more pertinent for the current political climate, not only here in the UK, but also further afield' - IBBY Link

'Told with amazing depth in a simpler and effective way. Our teen reviewer was very moved' - Angels and Urchins

I would like to order copies of Peter in Peril. Please pass this request to the sales rep covering my region.


üéÑThe time has come to reveal the very first of

This error message is only visible to WordPress admins
There has been a problem with your Instagram Feed.