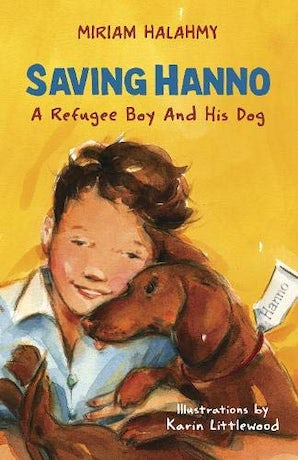 Saving Hanno: A Refugee Boy and His Dog

The moving story of a young German Jewish boy, sent to England for safety via the Kindertransport, who saves the life of his dog, Hanno, as war looms.

Nine-year-old Rudi has a chance to leave the dangers of Nazi Germany on a Kindertransport to England. However, he cannot bring Hanno, his wonderful dachshund. Luckily, his family finds a way to smuggle Hanno to London. But with England on the brink of war, Hanno is still not safe.

As a German invasion of England becomes imminent, many people decide their pets will suffer as well as drain limited resources, and thousands of animals are put to sleep. Rudi joins a group of children who vow to save their pets and he and his new friends set out on a dangerous adventure. Will Rudi find a safe haven for Hanno? This fast-paced novel, based on real events, is full of courage and excitement.

Includes an Author's Note describing the real-life events behind the story.