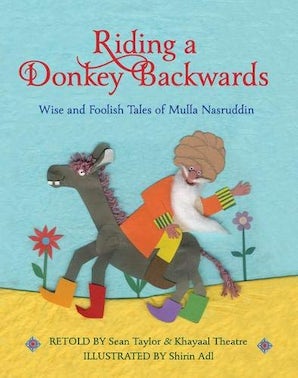 A collection of 21 riotous tales and riddles about the Mullah Nasruddin.

Why does Mulla Nasruddin spoon yoghurt into the river? What is the reason he rides his donkey backwards? Why does he paint a picture that is blank? And is he crazy to move into the house of the man who's just burgled him? Find out all about the amazing antics of Nasruddin in these twenty-one hilarious stories and riddles, famous throughout the Middle East for their jokes, riddles and wisdom.

'Written in a lively, fresh and accessible style, bridging the east and west, the old & new. The book’s backstory is also inspiring...' - Muslim Vibe

'Muslim culture is portrayed in its richness without the text feeling like a cultural studies project. Highly recommended.' - INIS

'Sumptuous...It's a collection of 21 tales and riddles about a trickster known across Muslim culture. The text feels modern, but the illustrations feel traditional. They are bright and welcoming, playful and intelligent.' - Minerva Reads

I would like to order copies of Riding a Donkey Backwards. Please pass this request to the sales rep covering my region.