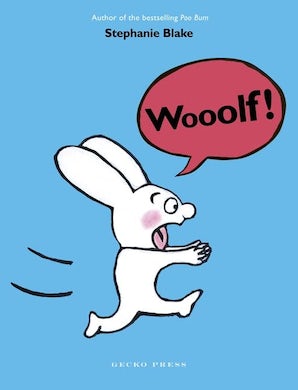 A twist on the classic cry wolf story in the best-selling series about Simon, the cheeky rabbit, who always gets what he wants.

There was once a little rabbit who always did only what he wanted. When his mother asked him to tidy his room he cried, “Wolf!” and when she ran away, he did just what he wanted. One day he did a wee where he wanted, and the wolf came to get him. “Wooolf!” he cried, but his mother didn’t fall for that. The wolf got him! It was just Simon’s father in a wolf mask. Simon promised never to cry wolf again. But when his mother opened the cupboard in the morning, a wolf cried “Awwoooo!” A funny new book with a twist ending in the worldwide bestselling series about Simon the cheeky rabbit.

I would like to order copies of Wooolf!. Please pass this request to the sales rep covering my region.