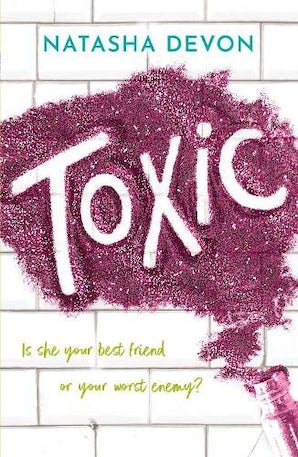 Llewella has straight-A grades, a lucrative blog and a omfortable life. But she’s never had a best friend. Could the new girl at sixth form, Aretha, be the one? Llewella and Aretha get tight, quick. And before long, Llewella is following a diet Aretha has designed for her and has quit her own passions to do things with Aretha instead. She’s determined to be the greatest friend she can be, even when Aretha says and does things that make Llewella feel the opposite of great. That’s how best-friendships work, right…?

Natasha Devon MBE is a writer, presenter & activist. She tours schools, universities and events throughout the UK and beyond, delivering talks as well as conducting research on mental health, body image, gender & equality.

She presents on LBC 7-9pm every Saturday. Natasha is a trustee for the charity Student Minds, an ambassador for the Reading Agency a patron for No Panic, which helps people experiencing anxiety.

She is a member of the Men & Boys Coalition, specifically advising on reducing male suicide rates, as well as a certified instructor for Mental Health First Aid England and eating disorder charity Beat. In 2018, Natasha co-founded ‘Where’s Your Head At’, a campaign aimed at improving the mental health of British workers through education and law change.

She is also founder of the Mental Health Media Charter, which scrutinises media reporting on mental health with the aim of reducing stigma. A Beginner’s Guide to Being Mental: An A-Z was published by Bluebird in 2018, and Yes You Can: Ace Your Exams Without Losing Your Mind was published by Macmillan Children's Books in April 2020.

Her podcast ‘Staying Sane’ is available on Spotify, Acast and iTunes.

I would like to order copies of Toxic. Please pass this request to the sales rep covering my region.